Residents across the province are showing a lot of soul in supporting a shoe collection initiative started in Kelowna. 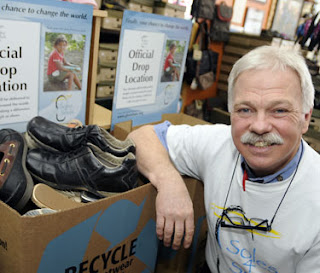 The second annual Sunrise Rotary Club’s Soles4Souls shoe drive is nearly complete, with some 60,000 pairs of shows donated this year.

Rotarian Jim Belshaw, owner of Roy’s Shoes in Kelowna and the driving force behind the campaign, said that is 20,000 more shoes than were collected last year.

On Tuesday, a number of local social service agencies were picking over shoes that could be used by their program participants.
“Last year, agencies put about 7,000 to 8,000 shoes back into the community for people in need of them,” Belshaw said.

The remainder are sent to the head distribution centre for the Soles4Souls program in Nevada, where the unwanted shoes are then sent to countries all over the world.

“It’s something I guess that everyone can identify with, we all have shoes in our closets that we don’t wear but could still be useful to people not as fortunate as ourselves,” Belshaw said.

“Otherwise, they just end up in the landfill, so there is a great recycling benefit as well.”

Chris Talbot , a volunteer with Freedom’s Door, non-profit society that uses the Twelve Step program and Christian principles to rehabilitate men struggling with alcoholism and drug addiction, was among the agency representatives collecting shoes for its clients on Tuesday.

“This is a huge benefit as we have 40 guys in the treatment program and many of them don’t have very much,” Talbot said.

He said finding runners for each of their program participants means they can benefit from the exercise routine the program offers through Parkinson Recreation Centre.

The same applies to steel-toed boots that can allow Freedom’s Door participants who are ready to go back into the workforce.

Belshaw said Rotary Clubs across the province have gravitated to the program, many indicating that next year their Rotary clubs will actively support the campaign.

Soles4Souls collects over 60,000 shoes and Shoes going to Slave Lake

As posted on Castanet﻿﻿
﻿﻿ The Soles4Souls joint project of Kelowna Sunrise Rotary and Roy’s Shoes has collected 60,000 pairs of shoes and boots to send to disaster and relief agencies in the developing world.

Even more shoes are on the way from Vancouver Island.

After the disaster in Slave Lake this week, volunteers gathered 2,500 pairs of Keen shoes, both new and lightly worn, to send off to the fire victims.

Locally, representatives from volunteer organizations including the Kelowna Boys and Girls Club, United Church and Ki-Low-Na Friendship Society were at the warehouse on Tuesday to pick out 2,000 pairs of shoes for their Outreach Programs.

Monetary donations are being accepted to buy new pairs of sandals which cost $1.00 per pair. To make a donation visit http://www.kelownasunriserotary.com/  and follow the links

It's Not Too Late To Help!

The Kelowna Sunrise Rotary’s Million Shoe Mission is nearing the end of the second annual S4S shoe drive for this year. Our last official day for shoe donations is this coming Saturday May 14th 2011.

Total collected to date is in the neighborhood of 40,000 pairs of shoes. 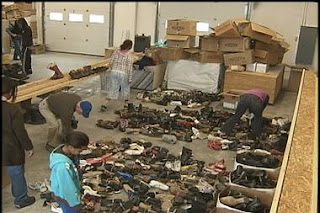 We just received close to 3,000 pairs of near new Keen shoes and boots which finished filling the first 53 foot trailer, we are now working on second one trailer.

UBCO, Victoria, Chilliwack and other locations are coming in this week. We expect to finish with over 50,000 pairs!

It is not too late to make a difference in someone’s life by dropping off a pair of gently used shoes to any Capri Insurance, Mark’s Work Wearhouse, McDonalds, Starbucks locations or Roy’s Shoes. Official drop off locations are all @


Also people can donate cash if they prefer - One dollar = One pair new shoes. Go to Roy's Shoes or http://www.soles4soulscanada.com/

An invite is going out to the local Kelowna social agencies so they can take what ever footwear they need for their clients and is planned for the 3rd week of May.

Tracy Rippel, Mark’s Work Warehouse store operator, is surrounded by shoe donations already collected as part of the Soles4Souls campaign.
Participating as an official drop-off location for the charity, gently used shoes can be brought to the store through to May 14.
During the upcoming Ladies Night taking place at the store on May 5 from 4 to 9 pm., customers will received an additional 5 percent off the already store -wide 20 percent discount if a pair of shoes are brought in or a $1 to $2 donation towards the project is received.
Remember to attach pairs together with an elastic ban or tie the laces.  Last year 7,000 pairs of the 40,000 pairs of shoes collected remained in the Okanagan and were distributed out to the community through agencies like Gospel Mission, Now Canada, Kelowna Women’s Shelter and the Friendship Centre.
The remaining shoes were shipped to the people most in need.  For more information on Soles4Souls visit the website: wwwsoles4soulscanada.com.
In addition to this charity, if $65 is spent during the Ladies Night shopping evening, Mark’s will donate $5 to breast cancer research.  Since 2002, more than one million dollars has been raised for the Breast Cancer Society of Canada.
Store is located at #102-3550 Carrington Rd.   Call 250-768-1934 for more information.

As posted in the Westside Weekly Sunday May1st, 2011

Soles4Souls deadline extended to May 14th 2011

The deadline for the Soles4Souls campaign has been extended, and there is no excuse for those hoarding extra shoes in their closets. "Every pair will make a difference in someone's life, there are hundreds of millions of kids and adults in this world with no shoes what-so-ever," says organizer Jim Belshaw. Belshaw, who owns Roy's Shoes, encourages Okanagan residents to dig through their closets and donate all unused shoes. "Take a moment before or after work, throw them in your car, drop them off at any Mark's Work Wearhouse, Roy's Shoes, McDonalds or Starbucks. There are locations all over, so there is no excuse for not finding somewhere to drop them off -- so make a difference in somebody's life," says Belshaw. Belshaw's goal was to gather 100,000 pairs of shoes by April 30, but that deadline has now been extended to May 14. "Last week, UBC-O called me and said, 'is it to late to get on board -- can we extend the drive.'" Belshaw says several other groups from other cities across the province have also come aboard, "Victoria just came on board, Trail just came on board, Port Alberni just came on board so we've extended until the May 14. Shoes just keep coming in, so we're going to keep collecting as long as we can." So far, approximately 30,000 shoes have been collected. Last year, the campaign gathered 40,000 pairs of shoes in 25 days.
by Daniel Hayduk - Story: 61653 Apr 28, 2011 / 5:00 am

About The Sunrise Rotary Kelowna

Sunrise Rotary Club is part of a worldwide organization of more than 1.2 million business, professional, and community leaders. Members of Rotary clubs, known as Rotarians, provide humanitarian service, encourage high ethical standards in all vocations, and help build goodwill and peace in the world.

Since Kelowna Sunrise Club’s inception 25 years ago they have raised and distributed hundreds of thousands of dollars into the community. Sixty percent of all funds stay right here in Kelowna and the remaining go to international projects.